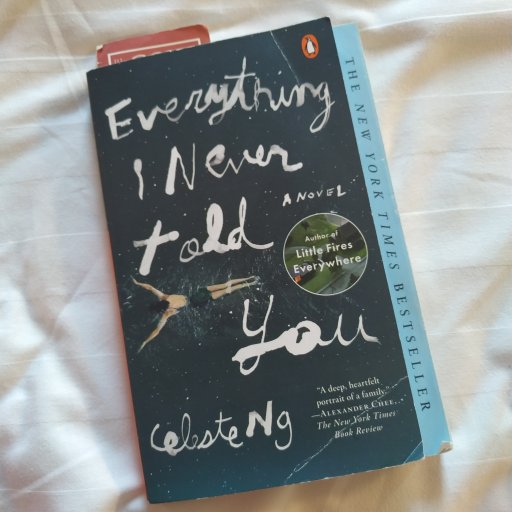 “You don’t feel like smiling? Then what? Force yourself to smile. Act as if you were already happy, and that will tend to make you happy.”

This debut novel by Celeste Ng tells the story of an Asian-American parents; Marilyn and James Lee, and their three teenage children. There’s Nath, the oldest son who is undeniably talented, and Hannah, the youngest daughter of the family. But whatever they’re doing, it’s often put aside by their parents because of Lydia, the middle child. Though she never asked for it, Lydia’s described as the golden child of the family who’s holding up all of the expectations from her parents. From the expectation to be a successful doctor in the future, expectation to have a good social skill, up to the hinted expectation for her to always follow what Marilyn and James say. Without realizing how Lydia is mentally and emotionally exhausted because of it.

In the book: ‘Everything I Never Told You’, character introductions are not something that starts off the book. Because from the beginning, readers are faced with the main conflict of the story first; Lydia’s death. From there, the story then unravels about the family’s problems in the past, about the parents perception of the children, and about deep feelings and secrets they never tell each other.

Quite frankly in my opinion, this parallel plot Celeste Ng decided to use makes it more challenging for me to understand it. Simply because I rarely read a story with this type of plot. But once I get used to it, it gives a sort of a mystery vibe to it that kept me asking about, “what happened with Lydia?”, and it became one of the things that made me addicted to read this book.

Continuing with the conflicts addressed, the book introduce problems with interracial marriage and teenagers upbringing in a sincere way. It explains how the family, despite being a legitimate American citizens, they never feel belonged anywhere. Misconceptions just follows this family around. Affecting the lives of the three teenagers and creating more and more chaos and misunderstandings, even between the family members.

“You loved so hard and hoped so much and then you ended up with nothing. Children who no longer needed you. A husband who no longer wanted you. Nothing left but you, alone, and empty space.”

Though behind all of those chaos, this heartfelt story is about a mother, feeling unwanted by her family. About a father, trying to find a coping mechanism towards the lack of understanding he faces because of his race. About siblings who’s trying to find their purpose in life, even with the little support given by their parents. About a daughter trying to mend her unstable life. And most importantly, it’s about a family trying to find comfort and understanding in one another.

With that being said, I think that ‘Everything I Never Told You’ can reach the hearts of every reader, whatever role they’re in. The story itself is a subtle reminder of how every family member may have problems that they decided to keep to themselves. It’s a reminder for us, as children, siblings, or parents, to at least try to keep in touch with those people that we call as family. Not with the intention to judge or criticize them, but to understand the ups and downs of life they’re going through, like what family is supposed to do. So as what Celeste Ng worded out:

“They never discussed it, but both came to understand it as a promise: he would always make sure there was a place for her. She would always be able to say, Someone is coming. I am not alone.”