May 15th, I came back from Yogyakarta after following my school study tour. This program was for students who have just graduated. During the study tour, we visit a lot of places that I never been before. So, this story will be devided into two posts, according to the day of activities.  Now, enjoy the first one!

The study tour started on Saturday night (12 May) at 9.30 pm, and ended on Tuesday at 2.00 am. When we were there, it was quite challenging to take a rest. Because the schedule was very tight and we only slept in the hotel for one night.

We arrived at Yogyakarta on 13 May 2018 at 4.30 am. Everyone was still sleepy that time, including me. Because the night before, a lot of us just slept at midnight. So we only have 4-5 hours of sleep.

The bus stopped at Grafika Restaurant, Sleman, Yogyakarta. Teachers told us to take a bath and then pray shubuh. Me and my friends go to the toilet and found out that it was so crowded! There were a lot of student from other schools that also arrived at the same time.

When we almost get to the toilet after lots of minutes of waiting, a teacher told us to prayed shubuh first so atleast we didn’t missed it and hopefully after we prayed shubuh the queue would be less crowded.

When we came back, the next problem has arrived. The toilet area was more crowded than before. Because of that, me and my friends only have time to changed clothes, brushed the teeth and washed our face quickly.

After changed our clothes, we’re scared that we were the last one to came to the dining area. But it turns out that everyone still waited for the food. So we just searched for an empty table and waited there.

The food was served around 8am. There were fried chicken, bakwan, etc. But altough everyone was so hungry, a lot of them didn’t finished their food. Maybe the taste just wasn’t like their expectation.

Anyway, after breakfast we went to Pindul Cave, Gunungkidul to do cave tubing. For anyone that don’t know what cave tubing is, cave tubing is almost like rafting. But instead of doing it in a normal river, we do it in a river inside a cave and we do it using tube. And usually in cave tubing the water stream is not as hard as rafting. So in my mind, I thought it gonna be relaxing and fun.

But actually, I was not relaxed when doing it. Again, the problem was because there were too much people over there. And also the stream was a little bit weird so we had to hold on really hard to our friend’s tube. If only the people wasn’t as much as that, I think it would be much more better.

There are two different cave tubing routes over there. The first one is the short route, it only takes around 30-40 minutes to do it. And the second one is the long route, it takes 1-2 hours to finish it. Maybe because my group is still under the age limit, we were directed to follow the short route.

The route / track split up in the middle. And since the track split up, almost half of the people was directed to the long route. That’s where we can actually enjoy the cave tubing experience.

At the end of the route, we were served by this amazing view. There are a hole at the top of the cave. So when the sunlight drop in to the cave, it looks really amazing! 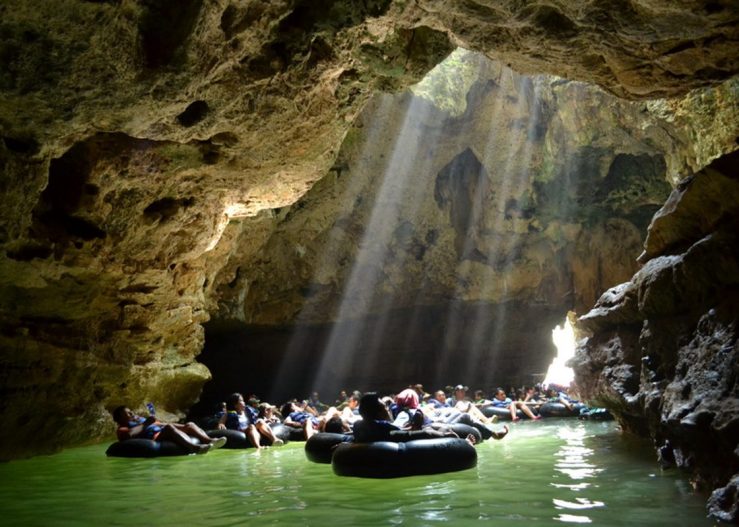 Not long after that view, it was time for us to get out of the tube and walk to where the pick-up car taked us to the same starting point. Once we arrived, we quickly grab our clothes and took a bath in the bathrooms that were provided. It actually took a long time because we have to searched for an empty bathroom or wait in line. But after took a bath, I was so refreshed again and can’t wait for the next destination, Kukup Beach.

But before we went to Kukup Beach, we were served lunch by the committee. The food were bihun noodles, tofu & tempe, fried chicken, and watermelon. It were simple dishes but delicious. We ate it quickly so we can go to the beach as fast as we can.

Kukup Beach was not as crowded as the previous destination. So we really enjoyed our time when we were there. The beach itself is quite unique. Unlike any other beaches, there were mossy stones between the sand area and the sea. All of my friends played in that stone area. It was a lot of fun. But we have to be careful for not to slip at the stone that we stepped on.

We played at the beach for almost 2 hours. We also took a lot of photos by using our teachers handphone. But  I don’t know why our teacher only sent us one photo up there.

At 2.45pm the teachers and our tour guide called us to go back to the bus. When everyone has arrived, we went to two places. The first one was traditional food shop if someone wanted to buy a souvenirs for their family. And then we went to a restaurant to have dinner after a long day of trip.

The taste of the foods was really good. A lot of us took more foods after the first eating, including me. It was definitely an upgrade taste after some disappointing foods that we had in the morning. 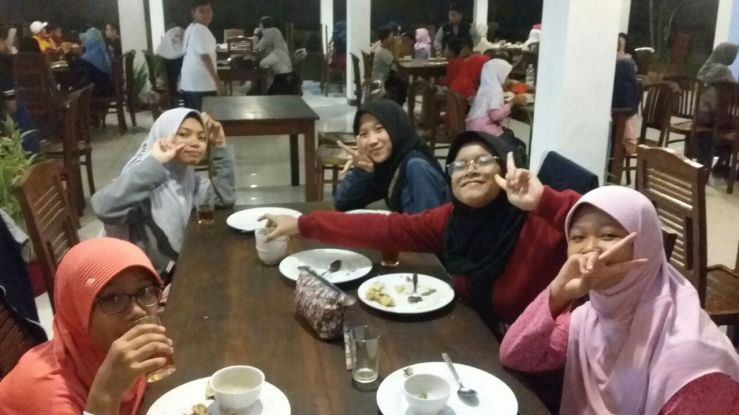 After that, we took some rest at the hotel that our school already booked. The hotel place is near from Malioboro. So we actually really wanted to go there after we arrived. But the teachers disallowed us to go there because we still had a busy schedule on the next day.

Because we can’t go anywhere, I just got together with 2 of my roomates and go to the room we have got. After a quick bath, we all go to bed eventually. And in that time, we were really can’t wait for what will happened the next day.