In this weekly reflection, I will tell you about the fun competitions that my school held from August 13th until 18th to celebrate Asian Games 2018 and Indonesia Independence Day. We called it The Mini Asian Games.

We compete based on our house and not based on our class. So, the meaning of ‘house’ in Cikal is similar to ‘clan’ that each clan consist of some students from each grade and also teachers and staffs. It’s the same with Harry Potter’s school- Hogwarts, if you know the story about that. So when we become Sekolah Cikal member, we will be divided into 4 houses: Phoenix, Centicore, Unicorn, or Dragon. Usually when there are special event or activity, all school member will be grouped according to their house.

My house is Phoenix, the same house with Lea, Nanda, Rio, Lala (Year 6), Oni (Year 6), Kayla (Year 5), etc. However, because of the large of the group member, in the Mini Asian Games, the competitions were also divided into each grade. So there were competitions for MYP (Middle Year Program: Year 6-8), PYP (Primary Year Program: 1-5), RJ (Reception Junior: TK A), and RS (Reception Senior: TK B), and also for teachers and staffs.

The competitions we can join were handball, futsal, badminton, athletic (running), and swimming. Each student were asked to join at least one competition. At the first time, I only registered for handball competition, but my teachers also registered me on athletic because there were no female student from Phoenix that will follow athletic competition.

So in a week (starting from 13th to 18th of August), there was one or two competitions every day except in August 17th because we were off on that day. The schedule for handball and athletic that I registered were on Thursday.

I was very excited in the days before the competitions. But because a lot of my friends got flu that days, I finally got flu too and that made me unable to go to school on Wednesday. I was really sad and worried because I thought I can’t join the handball and athletic competitions.

Luckily, on Thursday, I can go to school and joined the competition! But still, I only join the handball game because I’m scared I will be sick again if I join both of the competitions. So I only chose one of them.

On the first match of handball competition, Phoenix house was competing against Dragon. We actually quite nervous, because students from Dragon house is really good at sports. And from my friends story, Dragon team is very hard to beat.  So, we tried to do our best on the competition.

At the end, Phoenix team won with the score 13-7!!! Every Phoenix member were soo happy! I was so grateful there were Rasya, Nanda, and Rio in my team. Because I think our teamwork is good, and I don’t think my team will be able to defeat the Dragon if we don’t have them.

Other than handball, Phoenix also won on the elimination of futsal and swimming competitions. So on Saturday, we did the final of the competitions. 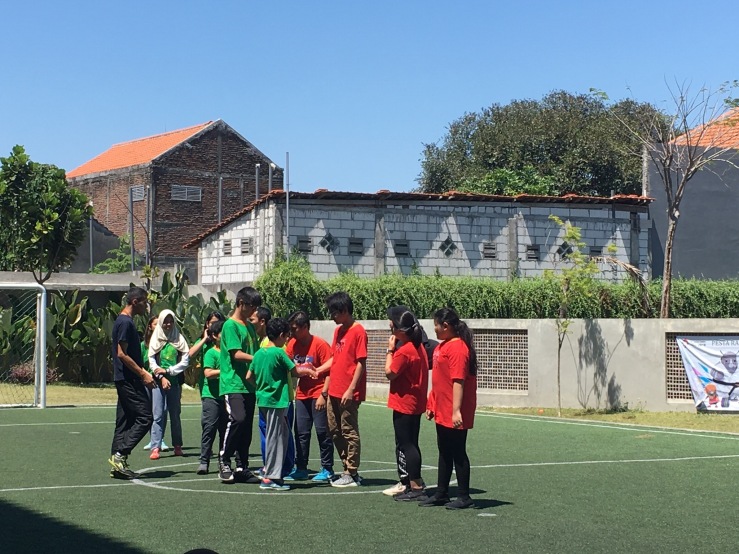 The final result was… Phoenix won on futsal and swimming competition! We were so happy about that. Although on handball competition, we automatically loose because our teammates wont come to the field when the teachers called them three times.

From this competition, I learn that having a great teamwork is really important in a community. Indeed, not everyone in my team have a really amazing ability in handball or sport in general. But it didn’t blocked us to help them as much as we can.

Then, I also learn to appreciate people that is different from us. Because people have their own ability and preferences, and sometimes that differences can make us a little bit annoyed in a team. But as a friend, we have to respect and appreciate them that already tried to help us.

Other than the finals of the competitions, on Saturday the vocal club also did charity for the victims of the Lombok earthquakes. The way we did the charity was by singing in front of the parents that attend to the school.

Me and Mazaya sang Dance Tonight, Never Enough, and Million Dreams for the duet song, while the other song we performed individually. The song that Mazaya performed were One Last Song from Sam Smith, and All of Me by John Legend. And the song that I performed was Butterfly from BTS.

So, that’s it for the fourth of my weekly reflection. Overall, this Mini Asian Games was a really cool experience. This activity is related to one of Cikal 5 Stars Competency, that is broadminded and physically sound. From this activity we can be really active and make us really excited about doing sport. At the end, it can help us to be more healthy and having more physical ability. I hope there will be something like this every year. Bye!