Besides Royal College of Music, London College of Music (LCM) is also one of the largest music college in the world. Although it is not established by the royal charter, but it is well known for its alumni that now become songwriter, music producer, founder of an orchestra, and etc.

Back to the competition, I participated in the Grade 4 category and I chose to play Billie’s Song by Valerie Capers. I practiced this song for about 2 months.

Actually, comparing with other song choices, most of the people think that Billie’s Song is one of the simpler song that is in the LCM Grade 4 book. But I still chose that song because I can feel the emotion, and during my performance I want to be focused on showing the meaning of the song rather than the difficulty of it. I think, that’s important thing in playing music or doing some other arts.

When I saw the other participants from several grades, as I predicted, most of them chose the song that has high difficulty or technique. But unfortunately, they couldn’t express the soul of the song in their performance. In my opinion, musical technique is important, but it will not be completed and well performed without the right expression that reflect the soul and the meaning of the song.

Since I’m the only participant that played ‘Billie’s Song’ in this competition, it’s also an advantage for me to play it without worrying that the judge will compare me with other participants that maybe have different interpretation about the song.

I really tried to do my best there, and I think I really did. As I can felt, I could play the dynamics of the song clearly. I really proud of myself because of that, although that time I was still unsure about the result from the judges because there were some participants that also did as good as me.

So when the winner of the Grade 4 was announced, me, mamski, and Miss Mita didn’t think that I will get the 1st winner! I’m so happy and grateful to be in that position. This is the second time I won the piano competition after The Quatro Music Competition two years ago that I mentioned before. 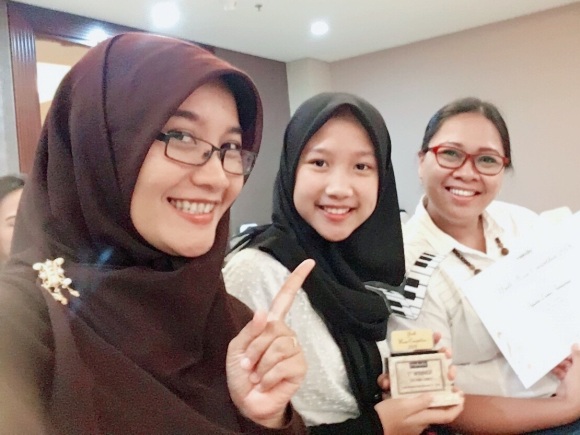 Me and mamski did a reflection about this competition and how I can get the 1st place. First, I think this is related to how the participant could interpret the meaning of the song and performed it clearly. Because as I said previously, I chose the song that I can really understand about the emotion of it so I can play it well.

From this experience I have learned that music competition isn’t just about how we choose the difficult song and play the notes correctly, but it is also about how to show and express the emotions of the song that we play.

Second, I think the competition itself is also a place to do different learning process. It’s not about how to get an award, but how to entertain the audience with a good performance. For me, since the beginning I want to participate in this competition to train myself to get used to perform my ability as good as I can in front of other people. So before I performed yesterday, I have a thought that if I can’t enjoy the song and only think about the difficulty, I could never make those people feel the message of the song and enjoy it as well.

Lastly, I also learned about the important of controlling my emotions during the performance. Before I got into the stage, I totally forgot one of the section of the song, and that made me quite panicked. But I tried to calm myself down, because I know if I start panicking, then everything would be even worse that it actually is. So once I became calm, it was the time for me to present my song, and I did it as I want.

Overall, I’m really happy that I had a good experience through this competition, because I have learned a lot of things from it. I hope in the future, I will get so much more great learning process that can improve my musical ability to be a good musician someday.

A middle school student that loves her family, friends, books, and piano <3

Wow! Congratulation Damai. It’s been two years ago since you join piano competition, do you nervous when playing the piano?

Thank you so much! Of course, I’m very nervous when I was about to perform. But still, as I said in the post, I tried to stay calm throughout my performance. 🙂

Congrats Damai! I can’t wait to see your next post!